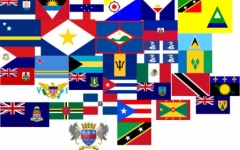 'Out of many people, One Culture’ – West Indian Culture - A way of life.

“Out of many, one people” - the motto of the Jamaican national flag, sums up the diversity of cultures which over the centuries have come together to make up what defines West Indian culture.

This motto can be seen to be symbolic of the philosophy of the wider West Indies. West Indian culture tells the story of a dynamic cultural situation which is the continuation of a meeting – or clashing of, cultures that has been going on for hundreds of years.

This began in the 15th century when African and European people came together to trade. Later this trade manufactured goods for slaves and raw materials to work on the plantations in the New World – West Indies, home of the Arawak and Carib peoples. Since then, the West Indies have been home to other communities brought together by the Colonial masters to toil the land for the benefit of ‘The Motherland’.

These communities include, poor white indentured labourers, Malay Chinese, Indians and European plantation owners. From this milieu has emerged a rich, vibrant, resilient and creative culture.

However, the positive strengths which have emerged out of this adversity can be swamped through lack of self-esteem; created through the force-fed consumption of negative stereotyping to West Indians by the colonial masters and pseudo-historians. This stereotyping still continues today in a diluted form.

It is perhaps for these reasons West Indians are sometimes perceived as having no positive culture of their own. We often hear talk of ‘lack of identity’ a search for ‘roots’ and ‘lack of culture’, sometimes from people of West Indian or in today’s terminology ‘African Caribbean’ people.

‘Culture is a way of life’

To enable us to reclaim our self-esteem and dignity I believe we need to reclaim the positives from our culture, and use it to re-kindle the strength, warmth and wisdom that enabled our ancestors and parents to forge ahead with dignity and determination, in spite of all the adversity they endured.

First in searching for identity, roots, language etc, it is important to know that before slavery there were the ancestral identities: Ibo, Yoruba, Ashanti, Efik, Ewe, Mandinka, Wolof and so on. (See picture above of the first day of an Ashanti Yam Ceremony in 1817)

The African slaves brought with them their traditional values and principles, which today still represents the major characteristics of the culture in the Caribbean. They were a communal people who had their own language and religion.

Respect for the elders and learning is paramount; the belief that the elders have knowledge and wisdom gained through experience of life. Parental responsibility is supported by the extended family and oftentimes neighbours. Children are taught respect and principles by the elders. The proverb; “It takes a whole village to raise a child’ is symbolic of this communal tradition. So whereas some children are growing up in a one parent household, the notion of single parents is not an issue as in the UK, as neighbours and extended family alike help with parenting.

The tradition of sharing, especially food with friends and strangers alike is a classic example which characterizes West Indian homes.

Music, Song and Dance characterizes the culture of the West Indies. The roots of this can be traced right back to West Africa. From Calypso to Soca, Reggae to Raga and other modern day music and dance. The celebration of Notting Hill Carnival which takes place every year in London and is the biggest street carnival is Europe, comes out of West Indian culture. Carnival takes place in various islands of the Caribbean and is symbolic of the creative spirit of the people.

The development of Creoles or Patois can be seen as the strength and determination of a people to develop a language for survival in order to communicate amongst themselves and with others. Forbidden by their former masters to speak their traditional languages the slaves developed a communal language, bringing together aspects of their own languages with European ones, in order to communicate. Its survival and use to this day, shows the resilience, creativity and strength of the people.

Folklore and stories play an important role in passing on morals and values in the community. A love of writing and literature can be traced back to the 18th century, to Cugoano, Phyllis Wheatly, Equiano and others who had lived some time in the West Indies. African-Caribbean children in Britain have inherited a tradition of orally transmitted folk tales. At the heart of the tradition are the tales of Anansi the spider and other typically Caribbean tales common to West Indian culture.

Among the non-African stories are those from the Asian cultures most important in Trinidad and Guyana. We hear stories of blood sucking witches or the skin-changing vampire Soucouyent who goes about her business and roams abroad not only in Dominica and Trinidad but the other French Creole speaking islands of the Caribbean. In Jamaica she is called the Old Hige (Hag). Anansi himself comes from West Africa where he is still flourishing. In Ashanti lore, Krokroko the great spider symbolizes wisdom; he is a trickster god comparable to an extent with Legba of the Dahomeans. The Hare/Brer Rabbit and Anasi together unite West Africa with nearly all the Black cultures of the New world, including Black cultures in Latin America. These two tricksters crossed the Atlantic with the Africans. The Hare and the Spider are African survival. They symbolize the will to survive and thrive under adverse conditions, through always being ready to work their plan on the characters around them. We should not underestimate Anansi. Stories were used in particular to teach ‘good manners’ to children.

Throughout the West Indies there has always been a strong emphasis on education and learning as a key to success in life. Respect for learning and the teachers is paramount. Teachers are respected as parents believe they have the best interest of their children in mind.

Proverbs have an important place in many cultures. They are part of the communal wisdom of the people. Proverbs are cherished in the Caribbean: they add life and illustrate everyday conversation; they are used as a tool of instruction, or as a weapon of verbal defence. Proverbs go to the heart of the matter.

So out of the coming together of the many different peoples and experiences have developed a unique spirit which has at its heart values and principles which if embodied will help bring about a more cohesive community where individuals can feel more at ease with themselves and all its parts are valued.

Culture is a way of life; it is important therefore that we embrace some of the early values and traditions of West Indian culture if we are to regain positive self-esteem, self-respect and dignity.

Read Back Home and get yourself in the Caribbean mood!

Cook up something delicious with our favourite Caribbean Recipes.