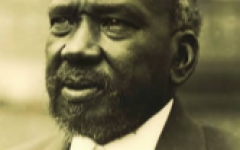 We are celebrating Black History Month by recognising and valuing the impact of inspirational black people who have helped turn the UK into the diverse and unique country that it is today. Watch stories like Bernice's story on BristolStories.org to hear about Black and Asian people's experiences in Bristol.

The history of black people in Britain certainly goes back a long way - well before the reign of Queen Victoria. There were Black people in Britain in Roman times, and there has been a continuous Black presence here since 1555. For Shakespeare’s London audiences, Black faces would have been a familiar sight.

Caribbean Women and the NHS

The NHS was established in post-war England to tackle the major social and economic problems of the day, including ill-health and disease. Following the destruction caused by the Second World War and labour shortages in England, it was critically important for hospitals to recruit staff from the Caribbean to work in the new NHS. In response to recruitment drives in the Caribbean, many people responded and arrived in this country to help the NHS establish itself.

Young Caribbean migrants - growing up in the UK

Little is known about the experiences of young Caribbean migrants and the children of migrants before the wave of large scale migration in the mid-20th century. There were sizable Black communities in Cardiff, Liverpool and South Shields but it is likely that for most growing up was a question of struggling to assimilate to life in England as unobtrusively as possible.

Africans were brought to London in the late 16th century because of Britain's role in the slave trade. By the mid-18th century, the capital had a significant free Black population. Fewer Black people came to London after slavery had been abolished throughout the British Empire in 1833, and the community declined during the 19th century.

Joe Clough was born in Jamaica in 1887 and orphaned at an early age. He became the first Black bus driver of a London motorbus.

Black British Swing: Caribbean Contribution to British Jazz in the 1930s and 1940s

The SS Empire Windrush, which sailed from the Caribbean in 1948, is commonly associated in modern British consciousness with the recruitment of much-needed labour for London Transport and the National Health Service, while at the same time solving unemployment problems in the sunny islands of the Caribbean.

For whom the bells toll

Many of us are aware of the historical contribution made by Gurkhas to the fighting strength of the British Army, and the involvement of troops from Australia, Canada, New Zealand and South Africa during the two World Wars.

The Self Help Movement was one of the most important trends within the communities of Caribbean migrants, and provided a basis for political activism during the late 1960s and early 1970s.

How Black Soldiers Helped Britain in the First World War

British Empire called on people across the world to sacrifice themselves to cause.